The meerkats have come to a Boston suburb 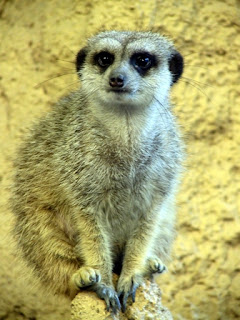 I was driving up 93 north of Boston last week for the first time in ages. No Woburn reporting beat, no depressed-older-artist ladyfriend in New Hampshire and no residence in Slumerville all have contributed to me not having to deal with that horrendous stretch of highway in quite some time.

It was for the Stone Zoo, the dilapidated concrete jungle and once-proud owner of Major the confused-as-fuck, sedated-as-fuck Polar Bear (he died of cancer in 2000, and now swims in an Al Gore montage in the sky). This fall, the Stone Zoo has... holy animal planet!... meerkats! Did they cut the town’s elementary school busing to make this happen, or was more taken from the Fire Dept’s budget again?

Wherever funding came from (yeah, I know the esteemed planning board wasn’t behind this, the zoo is state-funded) this plain old sucks on several levels. One, yeah I used to watch that show, "Meerkat Manor," with a certain special somebody who is now dead, so now I’m wikked depressed.

Two, more living creatures are forced to live in Stoneham. If they make Flower parade around Town Day and sell subscriptions to the Stoneham Independent, I’m never visiting the arena or theatre ever again, not even to cut across as a shortcut to Melrose. My short stint as editor of the Stoneham Sun wasn’t exactly fruitful, though my expose on gay sex late at night at the Sheepfold off the Fells could have won a NEPA.

Anyway, so yeah, I’m on the fence about this. My love of meerkats predates the lame ass show – When it first aired, my mother elatedly called me and said "There’s a show about your favorite animal! You’re always ahead of the trends, Michael!" Of course, I loved meerkats around the age of 14, before I aged onward and gravitated to other, more mythically enchanted creatures like giant squids and teenage pussy.

If I go see the meerkats, I’ll think of the dead ex. If I go to the Stone Zoo, I’ll think of someone else, a person who I went to the zoo often with, many times as a late-Sunday afternoon pit stop from Salem. But I’d really like to see some motherfucking meerkats. Why does everything come with ghosts? Do I need to live in Vladivostok to get some tabula rasa up in this piece? 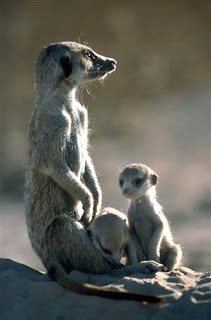 The zoos in New England suck cold dry shit out of a dead dog’s ass, and I’ve often lamented why the Hub of the Universe doesn’t have a giant animal park, instead settling for a zoo in a halfway house town with a mini-Route 1 cutting through it and another "park" bordering the most dangerous areas of Boston. (That park only has a giraffe and camel, anyway. You’re better off looking for wildlife off Blue Hill Avenue.)

I wish I didn’t see that sign in 93, and I wish the Stone Zoo didn’t have meerkats. The website said they came from San Diego, so I’m sure they’re stoked as shit being holed up around here for the fall. Let me tell you, that koala bear they had a few years ago didn’t seem to like his concrete cell, and wasn’t buying the tree mirage painted on the walls. Dude was pissed. But then again, koalas don’t really haul ass like meerkats do.
Posted by Michael Marotta at 1:01 PM